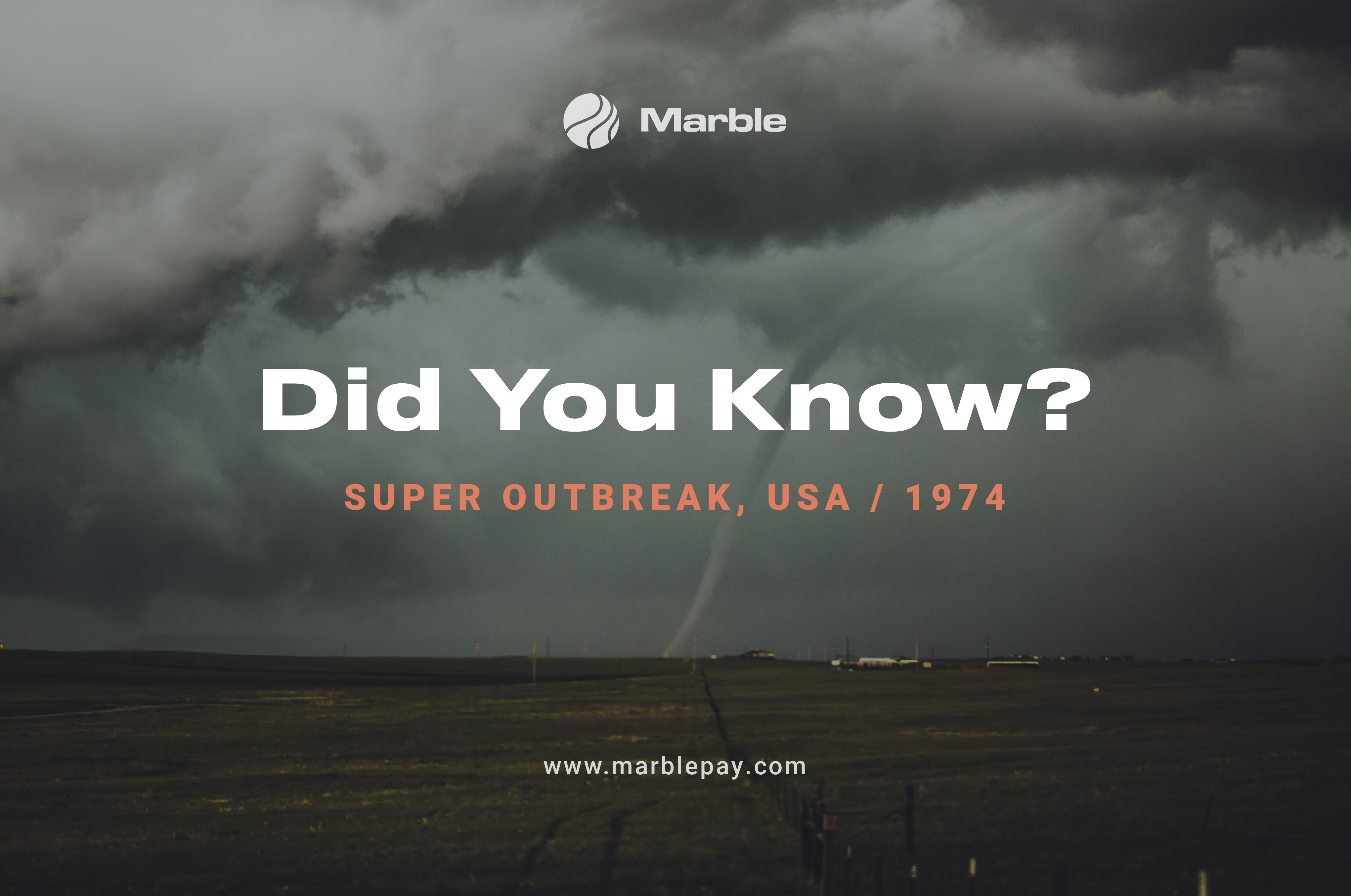 On April 1, 1974, a low pressure weather system began to develop across North America. As it intensified across the Mississippi and Ohio Valley areas, meteorologists warned of a severe weather outbreak. They were far from prepared for what was to come. Two days later, from April 3rd through to the 4th, 148 tornadoes struck thirteen different states. Watch out, Toto!

As its name suggests, the 1974 Super Outbreak was pretty extreme. The tornadoes damaged the equivalent of 900 square miles and caused approximately $843 million in damages. 315 people were killed, on top of the more than 6,000 reported injuries. Over 27,500 buildings were damaged. And ten of the thirteen states affected were declared disaster zones, with the majority of the storm’s activity concentrated across Alabama, Georgia, Indiana, Illinois, Kentucky, Ohio, and Tennessee.

Reconstruction and recent modeling suggests that if the 1974 Super Outbreak occurred today, the economic damage and insurance losses would be catastrophic, totaling around $3.5 billion in wind damage alone.

The Super Outbreak led to real change in how weather is predicted and communicated to the public. For one, broadcasters learned they were allowed to stay on air outside of normal operating hours (which would ultimately become a plot point in everyone’s favorite Will Ferrel vehicle, Anchorman). For another, the Emergency Broadcast System (now known as the Emergency Alert System) was renovated and has since been successfully used for - you guessed it - broadcasting weather emergencies.

The Super Outbreak also led to the development of Doppler Radar (exclusively, it seems, for the betterment of local news weather reports), along with the Geostationary Operational Environmental Satellite, a very fancy name for a satellite that tracks the weather. Now, new storms can be monitored somewhat more efficiently and effectively (But you know what they say about trying to predict the weather!).

Tornadoes are among the most expensive natural disasters and sadly, their frequency is only increasing. We’re looking at you, climate change! While most homeowners and renters policies do cover wind damage, you’ll want to read through yours to make sure it offers the protection you need to feel secure. And if you live in tornado alley, you may want to consider adding additional coverage (like a windstorm rider) to safeguard against losses that result from particularly high winds.

Either way: don’t be caught unprepared! To stay calm, we encourage you to look at the options that best fit your weather reality. And once you’ve figured out which policy makes the most sense for you, you can always add it to your Marble wallet, where you can keep your coverage organized, shop for new rates, and earn rewards just for having insurance.